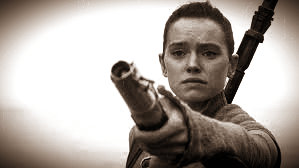 I have read a lot of theories of who is Rey's parents on the Internet. I have my own.

Rey must be Luke's daughter.

Here is my logic on this. Luke had a daughter, Han and Leia had a son, Ben. Luke and the Solos swapped children, Ben for Rey. Ben knows who Rey is, but they haven't met or at least haven't spent any significant amount of time together.

Ben received his training from Luke and Han and Leia take care of Rey. It's an uneven exchange because Ben is not very well adjusted while Rey is much younger and cute. The Solos are pleased with the arrangement and Luke is happy to have another Jedi candidate.

Ben goes nuts and kills off the Jedi candidates and destroys Luke's temple. Luke goes on the run, stealing Rey back from the Solos. He doesn't have a lot of time, the First Order is on his back. He simply snatches Rey away and dumps her on Jakku with a map as a fail safe in case Luke cannot return. Somehow, the map lands in the villagers hands and Rey ends up with Unkar. Luke probably didn't expect this, his ability to see the future is rather darkly tinged and dream-like.

Unkar isn't dumb, he know that Rey is important to Luke which makes her important to the First Order. Rey has an odd relationship with him because he doesn't want a blaster or lightsabre in his face. Once the First Order shows up, he becomes more threatening to Rey.

Han and Leia are crushed. First they try to find Ben, but his situation is intractable. They know where he is, but they can't get him back from Snoke. Oh, I bet they they tried.

With nothing else to be done, Han goes after Rey. He loses his Falcon on Jukku. He continues the search under the guise of trying to win back his ship. He isn't going to tell anyone why he is searching, he'll let them guess wrong. He doesn't really care about the Falcon, he wants Rey.

Nothing puts pressure on a family like long distances, financial issues plus losing a child and Han's search wipes them out on several levels. Leia on the other hand is perfectly willing and able to tackle the First Order, no matter the cost. The search and war campaign destroys the Solos small fortune, burns too many favors and Han starts double dealing people while Leia sets about taking the First Order apart by force.

Rey isn't the child Leia is looking for and Han is rather surprised that he has succeeded. So continuing in the Han Solo faulty logic chain, he offers Rey a job. One that will allow him to casually return her to Leia as a peace offering. You don't screw up your life and your marriage then expect to tell your spouse, "Not only was I right, I got the job done. We can start over now." Han knows that will not work. Chewie probably warned him about that one.

What do you think? Share in the comments below.
Posted by Phil Viverito at 3:40 PM

If you are interested, I have a small D&D book called Zero to Hero: Uncommon Commoners. Priced at pay what you want, every download no matter the price, supports me as an author.

Alternatively, you can support me by via Paypal.me. This fund goes to defray the costs of web hosting and new equipment costs. You can also buy me a coffee at Ko-fi.