A few weeks ago, my kids killed our TV. I think it was a dog toy to the middle of the screen, perhaps followed by a large dog. After about 3 days of searching for a replacement, I found this great TV on Amazon. 50" for less than $400. I bought it.

The links below are paid ads and will take you to Amazon.com.

Then disaster struck. Our cable bill arrived with a new price increase to $233 a month. Thanks Spectrum. I could buy a new 50" TV every two months, forever for less than the price of cable. Hmm. That is some bad math. I canceled everything but the internet which was a $178 savings.

But what to do about this brand new TV? Well, most of the time our TV is used for our PS4 and all of the games and videos we have for that. My wife, Kitty hated that answer. As for other movies, we already had Netflix. $54 for internet, plus $11.99 for Netflix. And then I remembered that the PS4 also could show Amazon Prime Videos which was another couple of bucks. Now, I had two different sources of movies and was still saving over well over $100.

(Ads provided by Amazon help fund this site by remuneration for clicks and purchases.)

Kitty pointed out that we didn't have local TV channels. What if the schools closed? What if there was bad weather and we didn't know? Ok. I was about to order an antenna and digital converter from Amazon, when someone told me about CBS All Access. It will show your local affiliate's programming, including the news.

I wish I could tell you that saving money was my Prime (see what I did there?) motivation, but what I was actually thinking about was CBS's new Star Trek show. My daughter was pleased that we could also watch Young Sheldon and Big Bang Theory. We loved all three shows.

This was getting pricey, I figured I might as well go all the way. I asked Kitty what TV show she'd miss from cable. She answered, "Golden Girls." A quick search showed me that it was available on Hulu. Another monthly charge, but still under the price of cable.

Another problem entered the mix. My wife asked about the TV in the bedroom. How would that work? How would I fix that? I had a refund coming to me from Google for a broken phone, so I used that to purchase a Google Home Mini and a Chromecast. Why not? If I was going to cut the cord, I wanted to make sure everything "just worked". A laptop or a phone could control the Chromecast in the bedroom and the PS4 in the living room would do everything else. The Home Mini was just bonus.

My figures ignore the cost of a new TV because I had already bought it. It also ignores the fact that I had Netflix and Amazon Prime from the get-go. Two pros and one con are tabled, so to speak. The Home and Chromecast were purchased with found money as I used a refund credit for them. As an added bonus, Amazon Prime also has a music selection which had gone unused to this point. Kitty can control that from her laptop and display it on the bedroom TV. One more feature go on the positive side of the list, which is free benefit of Prime.

For less than $175, I managed to get the home A/V system I always wanted and I am now using almost every feature of every service. My monthly cost is a mere $91, down from $230+.
Posted by Phil Viverito at 3:59 PM No comments:

The Amazon Back to School Round Up

Amazon is a life saver. I have ordered most of the things I needed for back to school. These five items are all things that will go with me to every class. When I get a chance, I will detail some of the more unusual items I picked up for back to school. Most of these will revolve around my technological choices in the classroom.

The first item is a suggested item for my Social Studies Technology in the Classroom. It is a version of Google Cardboard. I bought two, one for around the house for my kids and the second is to take to class. At 6 bucks each, I could afford to spurge.

I figured I should see Cardboard VR devices not only as a teacher's tool, but from the prospective of a student attempting to use them. I have 13 and 14 year old who are already showing a lot of interest. The first thing I have notices about them is, while VR seems like a very personal interaction with technology, my children use both pairs for a share experience.


The second item a set of 16 GB thumb drives at an excellent price.


And the last three items were simply writing basics.

The journals are tiny A5 sized and have 30 sheets or 60 pages of grid lined paper. The folders are simple two pocket multicolored affairs, 10 of each color. The pencils are... well, yellow and wooden.

While the first two items are tech, I like to be a little old school with my in classroom supplies. No batteries to charge or electronics involved.
Posted by Phil Viverito at 3:57 PM No comments:

Email ThisBlogThis!Share to TwitterShare to FacebookShare to Pinterest
Labels: Adult Learner, Amazon, Back to School, Basics

Amazon in the Classroom and on the Commute. .

In my classroom this week, we watched Hocus Pocus. The library had a copy, but one of the other classes snatched it up. I figure it would be available on Netflix, but I was wrong. I checked CBS All Access and Hulu. No dice. Amazon has it, as does Google Play. I went with Amazon because I had some coupons which reduced the price by $2.00. Otherwise, Google and Amazon would have had the same price.

The $.299 price is listed in the ad is for a rental. I've only rented a digital product once. It doesn't seem worth the cost but it is quick and easy. Live and learn.


Since I was already there, I loaded some music to my phone for the ride home. Twenty One Pilot's Levitate is catchy. The album is less than 11 bucks.

So much for saving money.
Posted by Phil Viverito at 12:13 PM No comments:

It's started already. The summer reading list is coming together. Neither book is in my usual comfort zone, but each is especially compelling.

First up, Josef Ferri's Trying to Catch the Wind. December of last year, I started working at a West Side school and ran into Mr. Ferri teaching at our school. His autobiographical story launches right in the middle of Buffalo's Westside, in the height of the 60's. Mr. Ferri's work is an atypical love story with humble beginnings and is driven across the county during one of the most tumultuous eras in American history.

Mr. Ferri advises: "If people open their hearts, a new love is possible."

Having spend weeks in his graceful presence, I know that he lives these words, daily. It's more than a quote, they are words he lives by.

My second choice was selected in that open heart and mind advice. Esmeralda Santiago's Cuando Era Puertorriqueña is another autobiographical story of change and tension. 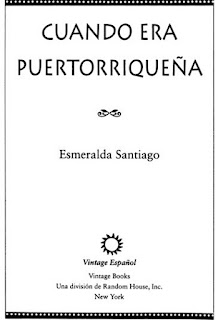 Again, we are taken back to the 1960's, this time lead by a young Puerto Rican woman and her family transplanted from the island to New York City.

I could have purchased this item in English, but I wanted to share the love of reading and literature with students at my school. The text and language is crisp and the learning experience is wonderful. I may struggle at times, but so far it has been well worth the difficulty.

Posted by Phil Viverito at 1:56 PM No comments:

Oh, did the family score this Christmas. We each picked up a Fire, 7"

These little devices work with almost any computer. I tried it on a Windows 7 and a Chromebook and both worked well. I was able to make some magic and install Google Play and Google Drive without too much trouble.

Here we have DoubleTwist from the Google Play Store displaying Matt and Kim from Amazon Music. 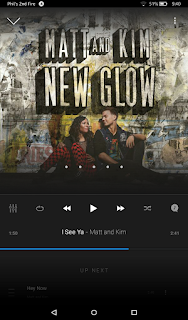 Between the native Amazon app and the Play Store, I have the best mix of software available on Tabbies today. Below you can see my new favorite NewsHog, available from the Amazon store. It beast the heck out of Google News. 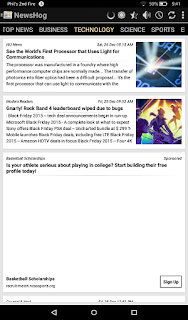 In the coming days, I am sure I will be adding more great software. I can't wait to sink my teeth into this thing.
Posted by Phil Viverito at 9:41 PM No comments: